In the spirit of Veterans Day, the Cullman Revenue Commissioner and staff wish to thank all veterans who have helped to make America free. We are the home of the free because of the brave. 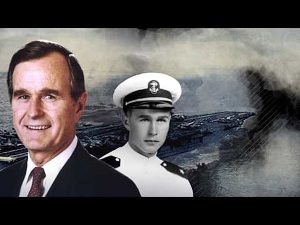 THE AMERICAN DREAM MEANS GIVING IT YOUR ALL, TRYING YOUR HARDEST, ACCOMPLISHING SOMETHING. THEN, I’LL ADD TO THAT, GIVING SOMETHING BACK. NO DEFINITION OF A  SUCCESSFUL LIFE CAN DO ANYTHING BUT INCLUDE SERVIVING OTHERS.  President George Herbert Walker Bush

As World War II began for the United States, George H.W. Bush was a 17-year old high school senior at Phillips Academy in Andover, Massachusettes. Enlisting in the Navy on his eighteenth birthday, George H.W. Bush became the Navy’s youngest aviator in early 1943. In the fall of 1943, Bush was shot down in the Pacific near the Bonin Islands after engaging Japanese soldiers firing anti-aircraft missiles. Forced to float in the ocean waters for several hours after his plane was shot down, Bush was rescued by the USS Finback and taken to Midway. Over the course of his naval career, Bush flew 58 combat missions comprising more than 1228 combat hours, and for his service, he received the Distinguished Flying Cross, three Air Medals, and the Presidential Citation Medal.

We salute President Bush and all veterans in honor of Veterans Day 2021.