In the spirit of Veterans Day 2021, the Cullman Revenue Commissioner and staff wish to thank all veterans who have helped to make America free. We are the home of the free because of the brave. 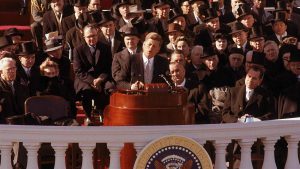 As a naval combat officer during World War II, the future President Kennedy fought the Japanese in the Pacific Theatre following the Japanese attack on Pearl Harbor, Hawaii on December 7, 1941. In August 1943, his ship was hit broadside by the Japanese destroyer class ship, the Amagiri, splitting the boat in two. President Kennedy swam to his nine fellow survivors, helping each to the wreckage of their PT 109 boat until they could be rescued. Following many miles of swimming perilous waters and two different Pacific islands, they were rescued six days following the sinking of their ship.

President Kennedy continued his naval career and ultimately lost his life for the country he loved. We salute him and all veterans in honor of Veterans Day 2021.