In the spirit of Veterans Day, the Cullman Revenue Commissioner and staff wish to thank all veterans who have helped to make America free. We are the home of the free because of the brave.

“If freedom of speech is taken away, then dumb and silent we may be led, like sheep to the slaughter.”

“However [political parties] may now and then answer popular ends, they are likely in the course of time and things, to become potent engines, by which cunning, ambitious, and unprincipled men will be enabled to subvert the power of the people and to usurp for themselves the reins of government, destroying afterwards the very engines which have lifted them to unjust dominion.” ― President George Washington, commander in chief of the Continental Army during the American Revolutionary War 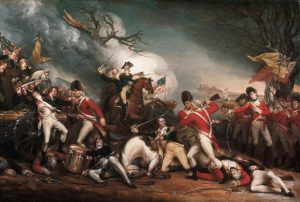 Famously during his military exploits, future President George Washington had two horses shot out from under him while later finding four bullet holes in his uniform. He was spared from death in battle to become a future commander-in-chief to America’s army. Initially serving under the British flag as a colonist, Washington became commander of the Virginia militia in 1752.

Resigning his military commission seven years later, Washington became a member of the Virginia House of Burgesses, later leaving this position to align with colonists who sought independence from the heavy taxation and political oversight of England. Washington ultimately led his colonist troops in the fight for American independence during a difficult eight-year war, culminating in the Treaty of Paris between the new American republic and Great Britain.

Washington resigned his Continental Army commission and returned home to Virginia, only to be recalled to service by his peers in the Constitutional Congress in Philadelphia in 1787. Washington headed the committee responsible for drafting our new nation’s constitution. On January 7, 1789, George Washington was elected the first President of the United States, taking his oath of office on April 30 of that same year. We salute President Washington for his service to the United States and leadership to form a more perfect union.